You guys this is a good one, you do NOT want to miss it.

When the Cabal Speaks

Blake McCammon (@rblake) asked who was around when job boards became a thing and boy did he get some answers. From George Larocque (@glarocque) who recalled working with Monster when the office was housed over a Chinese restaurant, to Chris Hoyt (@TheRecruiterGuy), who pinpointed 1999 as the year that job boards really “got crazy”. Eric Winegardner (@ewmonster), longtime Monster notable and all around Grand Poobah, backed Hoyt up with a hat tip to the SuperBowl commercial.

Josh Akers discussed the early founders: TMP worldwide purchased Occ.com and the Monster board and stitched them together to create Monster; Jeff Taylor was Adion…Bill Warren was OCC. While Dina Medeiros (@socalgirl) included a snap of her employee manual cover from back in the day. Just goes to show, ain’t no school like the old school. (FB SourceCon group)

Is Three Buck Chuck the Secret?

A fascinating read about how Trader Joe’s understands culture better than most white collar workplaces:

Trader Joe’s hierarchy is organized unlike anywhere else I’ve worked. Each store runs with one captain, and a team of eight to 12 mates. Everyone else is crew. And yes, they are thorough with the sailor-ship deck theme.

While the author assumed this would cause issues (having so many managers), she relates story after story of how it helped the employees and work was easily distributed among all the middle managers, instead of one person having to deal with all the fun stuff retail management brings. She also discusses how, as a teenager, she was given incredible autonomy on how she did her work. I highly encourage you to read this great article! (FastCo)

Probably not but this article about the invention of AI “gaydar” is something we should all be paying attention to. In case you’ve heard about this but are too lazy to click through:

One of the paper’s authors, Dr Michal Kosinski, says his intent is to sound the alarm about the dangers of AI, and warns that facial recognition will soon be able to identify not only someone’s sexual orientation, but their political views, criminality, and even their IQ.

With AI becoming one of the most talked about (if least understood) subjects in Talent Acquisition and Management today, it’s kind of really terrifying that soon we’ll be able to see things about people that…we don’t need to see. Why not? Because only some of what AI can figure is relevant to how successful someone will be in a position. You think candidates are pissed off now that an ATS rejects their resume before a live person even sees it? What about when it’s their FACE or their PERSONALITY the automation rejects…or their sexuality? From the article:

The paper states: Given a single facial image, [the software] could correctly distinguish between gay and heterosexual men in 81 percent of cases, and in 71 percent of cases for women.” These rates increase when the system is given five pictures of an individual: up to 91 percent for men, and 83 percent for women…The AI wasn’t 81 percent correct when being shown random photos: it was tested on a pair of photos, one of a gay person and one of a straight person, and then asked which individual was more likely to be gay. It guessed right 81 percent of the time for men and 71 percent of the time for women, but the structure of the test means it started with a baseline of 50 percent — that’s what it’d get guessing at random. And although it was significantly better than that, the results aren’t the same as saying it can identify anyone’s sexual orientation 81 percent of the time.

So perhaps all the hype is for nothing? Maybe. But if this is what we can do now, maybe Minority Report isn’t that far in the future after all? This got me feeling like Black Mirror. (TheVerge)

Is there a secret to #EmployerBranding in 3 buck chuck? Find out in this week's #6things: Click To Tweet

Anytime Beyonce’s name appears in an HR article, you KNOW it’s gonna be good and this one is no different! So Michelle gets put on a PIP (Performance Improvement Plan) and then like a few days later, left her job citing stress. She had a doctor’s note and everything y’all!

But then Michelle messed up, she decided to go to a Beyonce concert and use the skybox of her employer (RUFKM Michelle?). She’s asked about it and refuses to talk to her employer because her doctor says she ain’t ready yet. They email her again, basically like: “How come you cannot email us but you can do the single ladies dance at Beyonce’s concert?” She doesn’t respond. So Michelle gets fired.

But that is NOT the end of the story. Check it (Michelle has a pair on her, man):

Michelle sued her employer, claiming it interfered with her FMLA leave and retaliated against her for taking leave.

Guess how fast the court dismissed this BS! Real fast. The lawyer that wrote this article is so happy about it, he parses out what this means for you and me in his SHRM article:

Are you working on diversity hires? It may help to acknowledge they’re people and not form fields. Amazon Web Services biffed it on this one: 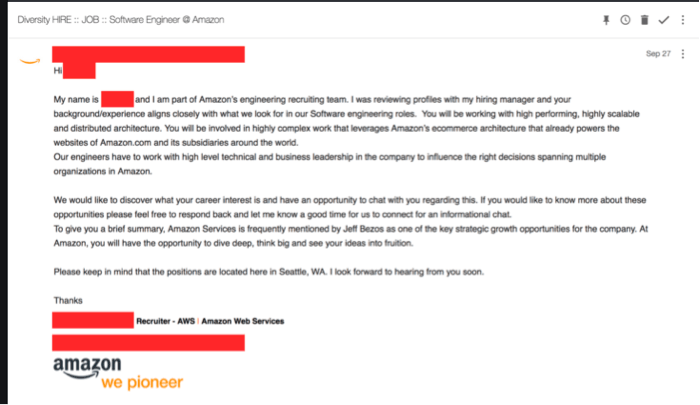 If you can’t tell “Diversity Hire” is right in the SL. Doh! (The Register)

I wanted this to be a bonus link, but the image itself is the link, unless you want to friend Glen (@GlenCathey) on FB. 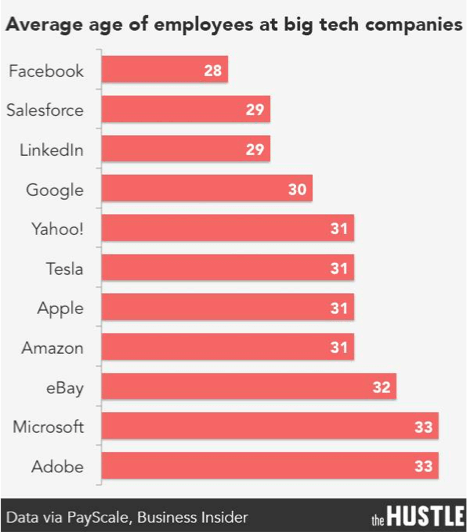 No matter how old you are, Glen Cathey will make you feel older. He posted this graph, which understandably caused mass confusion, a loss in productivity for everyone in his circle, and me to schedule another Botox appointment (JK, you can’t do them that close together or you look like Jack Nicholson). Anyway, I tried to get it from the source, the hustle, but it’s an EMAIL. Here’s where to sign up though. (TheHustle)