A lot has changed in the past twenty years for women in the workplace. More women sit in the boardroom and managerial roles are increasingly filled by women. Plus, the #MeToo movement has given a voice to survivors. A lot has changed, but there is still work to be done. The financial industry has remained a stoic pillar almost untouched by the momentum. Women account for less than 17% of senior leaders in investment banking and all of the top banks are run by men. What makes the financial industry different? This was the question hoping to be answered by a 2018 survey conducted by CNBC and LinkedIn:

“This look at challenges facing women on Wall Street is the first in a series of surveys aimed at highlighting some of the big issues facing women in the workplace. We polled over 1,000 men and women who work across the financial services industry in banking, capital markets, financial services, investment banking and investment management in the U.S. The survey was conducted between April 18 and 27.”

The findings are presented below.

A biased #CorporateCulture is the biggest obstacle preventing women from advancing in their careers. Click To Tweet

Corporate Culture is Holding Women Back

Roughly the same percentage of respondents (31% of females and 30% of males) believe that an unsupportive or biased corporate culture is the biggest obstacle preventing women from advancing in their careers. We can only hope Wall Street office culture has shifted from the likes of Stratton Oakmont into a supportive and inclusive one, but the work is not done. 32% of executives noted they’d seen leadership’s stances “change for the better,” while only 23% of non-executives said the same.

He Said, She Said

Women and men don’t agree on the bias existing in their culture. 74% of men agree that “men and women are promoted at an equal rate,” but only 47% of women said the same. And, 75% of males agree that men and women working at the same level are paid the same at their companies, while only 40% of females agreed. Women are more likely to be excluded from social opportunities like golf or after-work tomfoolery where relationships can be solidified and business deals made.

An independent survey by investment firm Ellevest found only 61% of men believe that men make more than women for performing the same jobs. The remaining 39% of men either do not believe the gap is real or chose not to answer the survey question.

How to Advocate for Equality in Your Workplace

“The tremendous strides for women in the workplace following the #MeToo and #TimesUp movements have yet to be truly felt in the C-suite,”

In 2017, less than one-fifth of newly-appointed CEOs at U.S. companies were women. Culture affects mentorships, alliances, promotions and pay. 56% of male respondents believe men and women are

equally likely to become leaders in their industry. Only 37% of female respondents believe the same. According to an internal study by Hewlett-Packard, women typically raise their hands for a promotion when they’re 100% ready, whereas men apply when they are just 60% ready. Men get 30% more promotions early in their career, setting their salary trajectories at a steeper angle from the very start. Women’s promotions, meanwhile, stall: women’s salaries peak earlier.

Have we eliminated interview bias?

“We’re not going to be equal until we’re financially equal,” Krawcheck said.

Sallie Krawcheck is a rare bird in the financial world. As former CEO of both Merrill Lynch and Smith Barney, Sallie pivoted off of Wall Street and founded an investment platform created by women for women. Ellevest’s goal has been to help close the gender investment gap by making investing more accessible and equitable for women.

74% of men believe that “men and women are #promoted at an equal rate”; only 47% of women agree. Click To Tweet 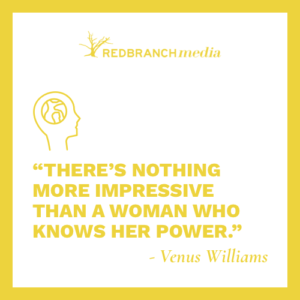 Did you know? Women (23%) and men (17%) each list the ability for employees to work a more flexible schedule as the top way the industry can foster a more inclusive, equal workplace for women and other minority groups.

66% of women agree that the finance industry will shift toward more equal representation in the next 10 years; 70% of males said the same. This is despite women feeling they face unequal treatment currently. Women and men both have a role to play in the intended equality in the financial industry. Implementing a supportive culture, removing hiring and promotion bias and offering inclusive benefits are just a few ways the working world, financial corporations included, will join the good fight.

“There’s nothing more impressive than a woman who knows her power.”

Kerry is the Web Project Manager with both technical and management experience. She guides the website developer, information systems manager and creative design team. She focuses on site architecture, user experience and site navigation and is the main go-between with the Client and RBM. Outside of the branch, she coaches high school soccer, travels, bakes, and takes french classes.

#RedBranchWeekly: Important Hiring Trends You Need to Be Aware Of