Last week, I had the pleasure of attending UltiConnect, Ultimate Software’s user conference. It was the first time I was on the analyst side of these (or at least attended the same meetings as analysts anyway). The very first day, we were treated to kind of a SOTU-style address, followed by a product roadmap/update. 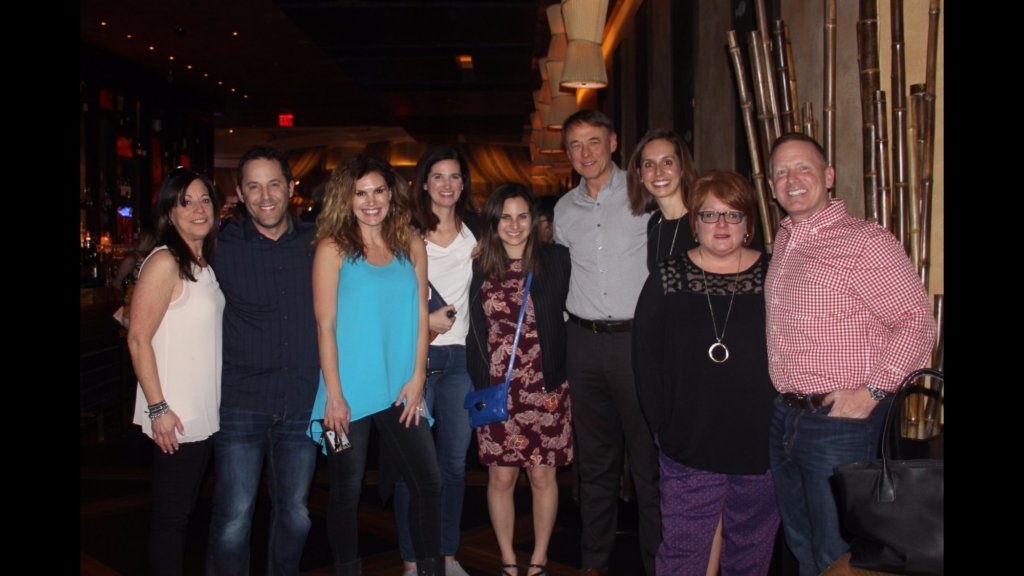 I tell you this to set the scene. For almost every stat shared (and sourced), there was pushback from someone in the room.

40% of the workforce is contingent or will be soon.

Learning needs to be mobile.

For the first time in my life, I wasn’t intimidated by the analysts or the reps of big enterprises because I know those stats. I don’t need them sourced (although they were) to know they’re true BECAUSE I SEE THEM IN MY OFFICE.

A few days later, Tim Sackett (@TimSackett), who I totally love and respect, said something about ‘Everyone in this room is an HR professional or practitioner, except Maren maybe’. And he’s correct.

In the ten years since I popped my (far less gray) head into this arena, I’ve had the pleasure of moving from blogger and paid social butterfly, to consultant and practitioner advisor to finally, running these programs both in my own company and running them in large enterprises.

And here is what I’ve learned:

The power balance is shifting. And there is nothing you can do to stop it. The idea that much of our workforce is flexible and contingent and DOESN’T BELONG TO US is scary as all get out to the enterprise. Well, guess what? It’s scary as all get out to me too! I have a whole lot more to lose than TDAmeritrade when I make a bad hire, which is why I very rarely MAKE bad hires. If the enterprise (and those advising them) do not listen to what Millennials and Gen Z want (without griping about how well they did without such perks as unlimited granola bars and ping pong tables) then the pendulum will swing entirely in the employee direction, which is just as unhealthy as when employers held all the chips. Because of this, you have to….

Draw the line somewhere. I had a long (ahem) discussion with Mervyn Dinnen (@MervynDinnen) about asking my employees to wash their own dishes. I took from his raucous laughter that he thought it was too much to ask but I disagree. I think my people would rather wash dishes in the office than have a fancy dishwasher and work 45 hours a week. I think they’d rather have work-life balance. And I’m right, research says I am and so do my people. It would cost me $60,000 to put a sink in my office and more likely for a dishwasher. My bet is my people would rather I hire a great editor, invest in great healthcare or offer parental leave that’s comparable with the world, rather than the U.S. Also, it’s important to draw the line somewhere. Do we have happy hour every Friday at 4? We do! They’re paid for it, they get recognition, it’s a small tangible reward and a great way to start the weekend. That is 52 hours of work for which they are paid to party every year! That’s an entire week and a half of vacation! That’s a great perk. Will I offer pawternity leave….EVER? Nah. That is a pendulum swung TOO far. But ask how many employees pop out to let their dogs out? It’s at least 15% of the workforce here.

Just because you don’t need something doesn’t mean it’s not a need. Millennials need regular feedback. I know, I’ve got an office full of them. I do not need regular feedback. I don’t even want it. As a proud Gen X-er (or cusper) I mostly want to be left alone to do my work. Maybe it’s because my generation were latchkey kids and left to our own devices. Maybe it’s because we’ve had so many booms and busts I’ve lost count. I don’t know. But in order for my workforce to be as effective and productive and engaged as they can be, I need to give them feedback. I can argue against the stats all day, but it doesn’t change their fundamental need. 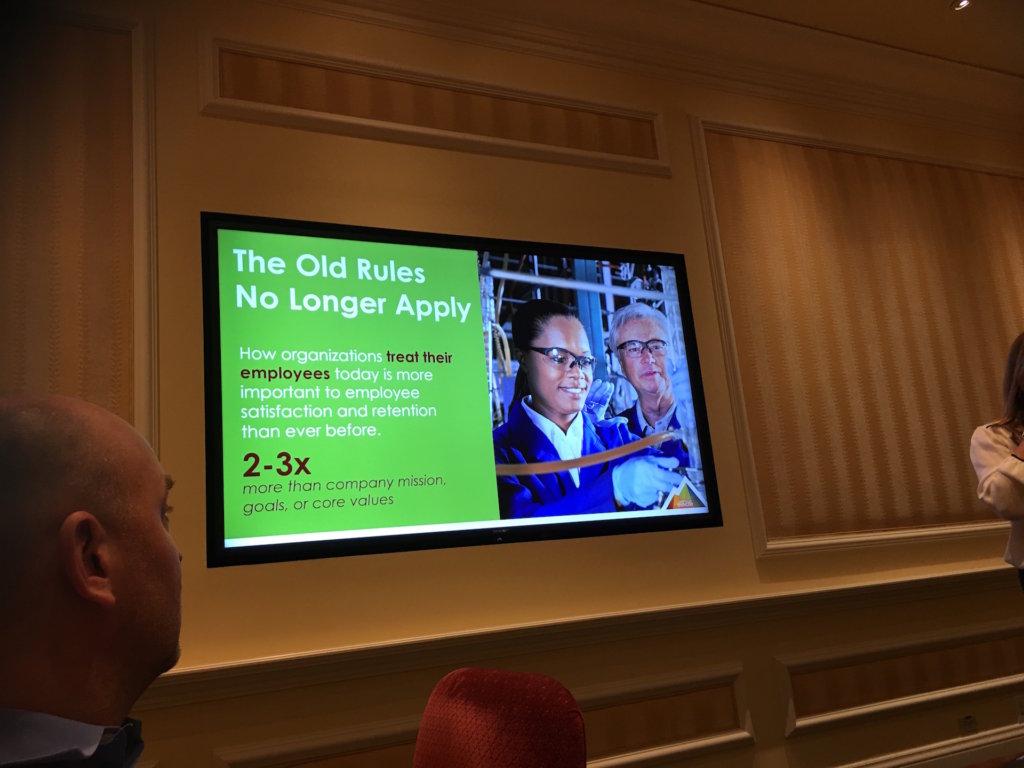 For every revolutionary reveal from a speaker or built within the product itself, I realized, here at Red Branch Media, we’re already doing those things. People get to look the way they want, identify however they want, change jobs within the organization, learn in a multitude of ways, get feedback via their preferred method, learn new skills on their timetable, enjoy flexible work… I mean the list goes on and on.

But despite my experience, which earns me a seat at the table, TIM, it is very limited in a lot of ways:

What works for me is not scalable in every instance. So in a real way, unless I’ve been in the trenches for more than a handful of people, I really can’t speak to bigger company needs the way that Robin Schooling (@RobinSchooling) can. I won’t understand retention on her level in a hospitality environment (which is why I thought the #UltiConnect industry roundtables were AWESOME). I won’t get the same challenges that Sabrina Baker (@SabrinaLBaker) deals with at Acacia Solutions, even though her target customers are around 100 or so. Even at that stage, a weekly Eatin’ Meetin’ isn’t possible. A 2 month trial period with new hires and interns may not work. Asking every new employee their preferred feedback method is nutso.

Or is it, though?

You might not be able to meet face to face with every employee, but why can’t you ask your managers to ask people to pick mobile, email or verbal when requesting feedback or when they are hired on? Why can’t you ask managers their preferred comms method before assigning the world’s biggest extrovert hugger manager to your new Silent Bob employee? Companies ask customers this stuff all the time. Forever 21 asks how I would like my receipt for heaven’s sake. If you work at a call center, how hard is it to allow work from home days? Or a casual dress code?

People listen to consultants more than their own employees. Which is a problem I know exists but don’t really want to fix. I’m just being honest in that it’s far easier to be the consultant who gets flown in to say do this or engage that, than the exhausted HR pro who is trying to get everyone to sign up for the supplementary insurance while our wackadoo POTUS keeps douching around. (Sorry, still pissed about that.)

There’s a reason companies like Ultimate are trying to bake these concepts into software. The world is changing, like it or not. Employees are changing and the technology has to support that to build a sort of bridge for those of us who resist change with all our might. I’m not bashing analysts here (or even Tim or Mervyn), I’m recognizing that we all have different definitions about what the world of work looks like and sometimes, even the practitioners look different.

Read Jeff Waldman’s Article about How Ultimate Treats Their Employees

Ultimate Software also seems to really care about their employees and they’re getting pretty big. I think almost 4,000 employees is what they said. Which I know is not as big as some of the companies in the world, but it’s pretty darn large. Their motto is “People First”. Ours is too. I’m not sure what the magic number is where that stops being the motto of HR, but it should be infinity. Not every small business solution is scalable but the needs of the humans in your organization MUST be taken into account. To continue to resist is well….futile.