Startup Life is Not THAT Different

I wish it were true that startup life wasn’t exactly like this but then I would have to explain why everyone here is at LEAST 10 years younger than me and why I have both a ping-pong and a pool table that are NEVER used. However, it is NOT because we believe old people are visually displeasing and out of ideas (because then I would be ousted as CEO). Check out this McSweeney’s (satire I think) on sweet startup life. (McSweeney’s)

Know anything about that #startup life or the color red? Get the info from @MarenHogan: Click To Tweet

Basically everything this guy touches turns to gold

Kevin Marasco (formerly of Hirevue) turns his Midas touch on troubled industry wunderkind Zenefits (which as of this writing would not actually load on my computer). This comes on the heels of sorely needed marketing and PR help which Jay Fulcher (@jbfulcher) calls: “an ideal time in its evolution.” From the release:

Marasco brings two decades of marketing leadership experience. Most recently he served as CMO at HireVue where he helped the company define and lead a new category while increasing revenue by over 4,000 percent. Previously, he was Vice President of Brand and Digital Marketing at Taleo (acquired by Oracle) and SVP Marketing and Sales Support at Vurv Technology, both leaders in talent management. Marasco is also an entrepreneur, having co-founded and mentored an innovative sports-tech startup.

If anyone can turn Z-town around, it’s him. (Zenefits)

In a world…where every article must be scrutinized and edited

We need a hero. And at RecruitingDaily (@RecruitingDaily), the reins are being handed from one fantastic editor to another. As Matt Charney (@mattcharney) continues to build the content side of RD and book increasingly fancier speaking gigs, who will become an executive editor! This is so friggin rad. I love both these guys and RecruitingDaily rose from the ashes of my alma mater RecruitingBlogs.com (@RecruitingBlogs). I so look forward to watching where they go under the brilliant direction of John Hollon (@johnhollon)! (RecruitingDaily)

Today in reasons why humans are garbage

I don’t watch Hawaii Five-0, but if I did, I’d be boycotting it RN. CBS is garbage, tv execs are garbage and I cannot wait until my kids’ generation takes over and we can get over this bullshit already. So Daniel Dae Kim (hottie of Lost fame and accomplished actor in like a TON of movies) and his equally hot and accomplished co-star Grace Park realized they were making way less than their white co-stars and during contract renegotiations were like “hey guys, can we get on their level?” and the showrunner was like “Nah” you can have an “unprecedented raise” because our show has “one of the most diverse casts” but we can’t like pay you the same as white people, that’s crazy. So they’re leaving and now it’s just two white dudes running around a Hawaiian island I guess. I dunno, I don’t really watch it. (Slate)

More shit about introverts I guess

I like introverts, I think they are fine. This article even says that the trod upon masses of introverts that apparently exist would be better CEOs. Great. But for the love of Pete can we stop talking about how great they are and how we can all do pretzel moves to incorporate them into our lives? For people who recharge by being alone, I see them post a lot of stuff about how great it is to be an introvert. Enough, be proud of whatever vert you are and let’s move ON. You still have to be a pro regardless of your personality. Believe me, if I started every day cursing people out and dancing the lambada on my desk, I wouldn’t be where I am today….cursing people out and doing the lambada on my desk. (WaPO)

Mike Haberman (@MikeHaberman) proves what I knew a thousand years ago when I started Red Branch Media, red is powerful. It made both men and women more attractive (I am presuming by whatever sex would be attracted to them). Red confers higher status and power. It’s also good for sales or executive roles, less so for jobs that require a lot of trust (and yes I realize the irony of that statement). Anyway, read the whole article, it’s fascinating and right here on Workology. (Workology)

Uber got you thinking about updating that sexual harassment policy?

See??? You gotta bite the bullet!

See what thing has been declared dead this week 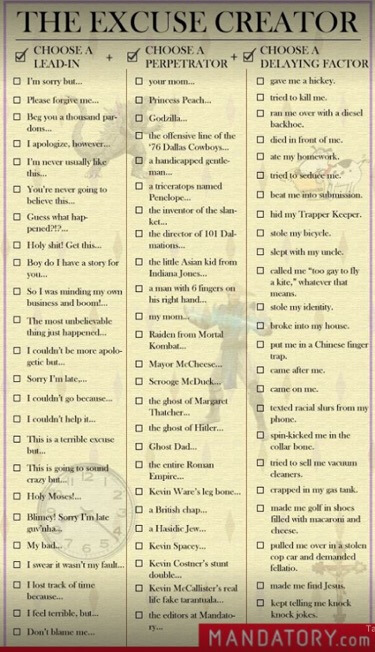