Uh Oh. You can’t give and then take away…or can you?

The Register discusses an employer branding boo-boo that IBM is having at the moment. Staff, heretofore allowed to work from home have been, AHEM, invited to grab a desk at one six offices or face termination. I love that they call it a Marissa Mayer moment. In the Employer Branding Group on Facebook:

According to sources, the six “strategic” offices US marketing staff must work from are in: Austin, Texas; San Francisco, California; New York City, New York; Cambridge, Massachusetts; Atlanta, Georgia; and Raleigh, North Carolina. El Reg understands that employees will not get to choose a nearby office, but will instead be assigned a location based on where their team is predominantly situated. The first wave of workers were informed of the changes on Monday.

According to the company, it’s not about cost-cutting or staff-cutting, but about ensuring productivity goes up…to compete with Silicon Valley. Is the work from home train coming to an end? Sure people CAN work from home, but the numbers we’ve seen supporting this are usually predicated on the fact that a lot of the rest of the workforce (the plebs) are in the office. (The Register)

Tim Sackett (@TimSackett) dove into some data that Hired put out recently and it was…kinda sad. Sackett writes:

Basically, our average salary offer increases every single year of age. It makes sense because as you age, you gain more experience, more experience is more valuable. Or is it?

The chart, also, shows that once a worker turns 50 years old or so, employers (but not you…) start offering those workers less money, even though they have more experience!

Sackett goes on to chat a little about why this exists. It’s actually kind of dumb that employers would pay less experienced folks MORE than older, more seasoned workers. Does your company suffer from age discrimination? If so, could you get more breadth of experience by looking at older workers? Check it out. (The Tim Sackett Project)

It’s Never Too Early to Ask for that Informational Interview

This little girl has decided she wants to work at Google. What did you do for your dream job this week? 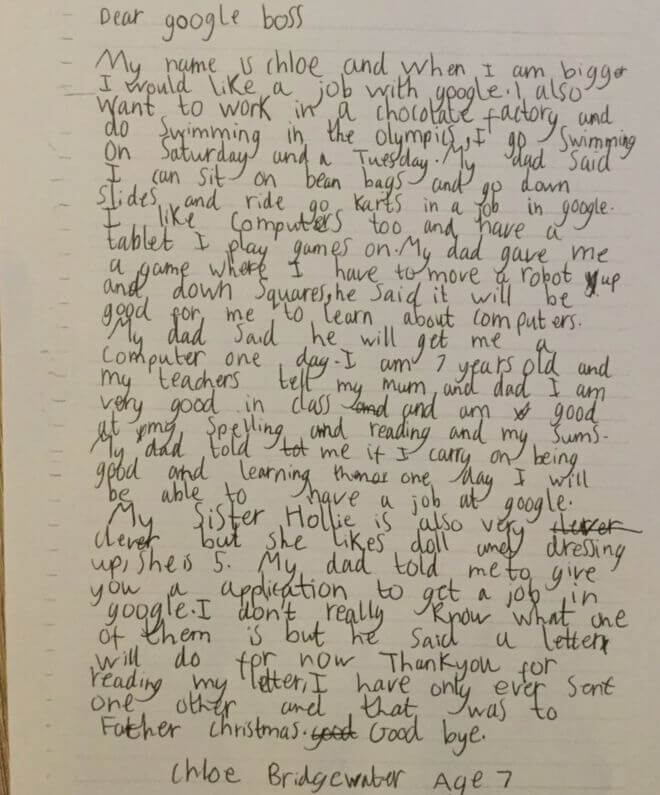 By debuting job LISTINGS y’all! Actually, it sorta sucks. Right after LinkedIn rolled out their new interface and product offering (which most recruiters immediately panned) Facebook started offering job listings. WHAT?! Everyone says they’re awesome, but I haven’t tried them or Facebook for Work. Also, apparently this competes with Glassdoor. (Business Insider)

It’s not shocking that RecruitingDaily wrote a post about smoking weed at work (and whether or not recruiters should care). What’s totally shocking is that Matt Charney (@mattcharney) isn’t the byline!! J/K It’s Tincup (@williamtincup)! However, this article is primo stuff. Breaking down not only the implications of bias against smokers of all kinds but asking the questions around how to view marijuana use in (and out of the workplace). It’s a brilliant piece of writing and sparked quite the conversation on Facebook. Read please. (RecruitingDaily)

We all complain about diversity within our ranks, or lack thereof. Soooo, what are we actually doing about it? Here’s a great accountability post from Food52, a blogging network that describes their team thusly:

Some of you pointed out that our Team page doesn’t exactly scream diversity—which is very true in some ways, and in others not. We are proud to be a women-led company in a men’s world. Our team includes many more women than most tech startups (unlike others, we’re always working to add more men to our roster). But we are also a company that is 92% white, 60% 30 or younger, with enough liberal arts degrees between us to paper a decent-sized bathroom—pretty typical of food media at large.

Then goes on to tell us how they plan to tackle their diversity issue. I might take a page or two from their playbook! (Food52)

Great Boss Primer
Brexit Bites Back
NYT is over being traditional
So you wanna work at the White House?